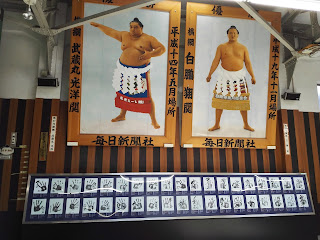 Sumo in ancient times was a sacred event to foretell an abundant harvest and to predict the will of the gods.

After the 12th century, sumo acquired the characteristic of a practical martial art to be used in the battlefield. In the Edo period (1600)-1868) sumo bouts began to be performed as part of shows in festivities at shrines.

It was not until the end of the Meiji period (1868-1912), o, the early 20th century, that sumo was mentioned as the national sport for the first time.

The winner in sumo is decided when the opponent is forced out of the ring or when any part of his body touches the ground.

In order to become a sumo wrestler, one has to belong to one Of the approximately 50 sumo stables. The stables take care of every aspect of the newcomers' lives including food, clothing, and housing, while training them to be strong wrestlers. It is a man's world except for the family of the stable master.

Wrestlers are ranked according to their ability. The lowest rank is called jonokuchi, which is the starting point. There are nine other ranks such as jonidan, sandanme, makushita, jüryo, maegashira, komusubi, sekiwake and ozeki. In the top rank are the yokozuna, or grand champions.

If you want to see the real Japanese Sumo, you must go to the ryogoku kokugikan in Tokyo.