During the Edo era, Yabusame was performed annually at Asakusa Shrine on January 5 as a New Year's rite. It differed in form from today's Yabusame, but people apparently turned out in droves for this entertaining New Year's custom that helped sustain their faith.

Asakusa Yabusame is another traditional event held in Taito, featuring equestrian archery cultivated through long tradition. Yabusame was restored as a stirring, magnificent tourism event that will be performed well into the future.
The Ogasawara family performed Yabusame along the bank of Shinobazu Pond in Ueno Park around 1955, and the family still performs the rite of horseback archery in Asakusa. 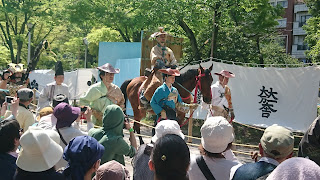 Yabusame Horseback Archery
The word for horseback archery, Yabusame, reportedly comes from the term Yabasemuma, which means to shoot arrows while galloping on a horse." The kanji characters for this term can also mean "to shoot an arrow with a whistle attached from horseback."

Yabusame was mentioned in literary works dating back around nine centuries, including Fujiwara Munetada's Chuyuki (diary of the minister of the right) and Fujiwara Akihira's ShinSarugoki ( new account of sarugoki [an ancient form of Japanese theater l).

Equestrian archery has been traced as far back as the late seventh century and Emperor Temmu's era, and is written as mumayumi-isase in the section on Emperor Temmu in the Nihon Shoki (chronicles of Japan).

The style of horseback archery that appeared later was apparently for imperial court ceremonies, and it was recognized as being different from standing archery.

This court ceremonial equestrian archery was performed often during the Heian era (late eighth to late twelfth century), but less frequently as aristocratic society fell into decline, although it continued under a new name, Yabusame, and in new forms when the military caste came to the fore.

Samurai equestrian archery flourished during the Kamakura era (late 12th to 14th centuries), from around the time Minamoto Yoritomo started the shogunate. Its rituals were rigorously implemented and it was eventually held only on the day of the rite called Hojoe at Kamakura' Tsuruoka Hachiman Shnne to give ritual thanks to living creatures. 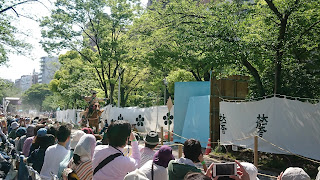 Horseback archery fell into decline with the end of the Kamakura shogunate, and almost completely disappeared during the Muromachi period (14th to 16th centuries).

The form was only observed in ceremonies at some shrines, and did not reappear in any high-profile settings until the time of the eighth Edo regime shogun, Tokugawa Yoshimune.

Yoshimune commanded that ceremonial equestrian archery be performed as part of ritual prayers for his heir apparent's recovery from smallpox in 1728, the 13th year of the Kyoho era, marking the first time for it to be performed in a public forum in around four centuries.

Horseback archery was subsequently performed under the auspices of the shogun's family until the end of the Edo era. Known as the hasamimono style, this era's horseback archery differed from the ancient style. Equestrian archery- both the old style and hasamimono style-are still performed at various shrines, including Kamakura's Tsuruoka Hachiman. 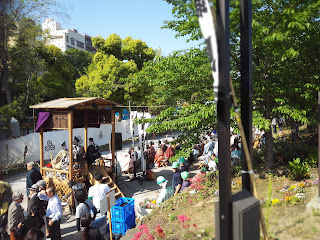 Kusajishi's origins date to 1194, the fifth year of the Kenkyu era. Minamoto Yoritomo was hunting at the foot of Mount Fuji, and his retainers kept shooting at and missing deer and other game.

Yoritomo requested an older warrior to devise techniques for practicing archery, and the warrior bundled grass together in the form of a deer and target practice was carried out at specific distances.

That is said to be the origin of kusajishi, which remains in the form of the Ogasawara school style of standing archery.

This was probably an outgrowth of equestrian archery, but has been performed on foot in modern times. Further, this is not formal ceremonial archery, but rather is mentioned as recreational archery in ancient books and was reportedly a competitive sport from the days of old.